The Haunting Of Floating Cow Ranch

You are Lakeview’s most affordable investigator. A sleuth, a detective, a private eye.

Penelope Piecatcher has hired you to check on her uncle, the excitable Morgan Bridger.

He bought some land from a shady developer out in the wetlands of Cooper’s Kettle, and had the harebrained idea to raise cattle out in the bog.

That was about a year and a half ago. At first his correspondence was regular and enthusiastic. But over time it became more infrequent. And for the past two months, he has stopped responding entirely.

Penny attempted to contact the locals to check on him, but they were unhelpful, repeating things like “bog witch” and “lowing beast” and “cursed.”

This adventure is about change. How people, geographies, and landscapes change and erode over time and become something different.

There’s also a lot of ambition, facing death, grappling with mortality, and worrying about one’s legacy.

And there are lots of mutant cows warped by foul necromantic magicks.

It was written to be played with Wicked Grin but can probably be adapted to other systems without too much trouble. I believe in you.

Tips For Playing And Having Fun Doing It

Morgan Bridger refused to listen when the locals laughed at him for trying to raise cattle out near the bog.

He simply wouldn’t hear it. He burned with determination to succeed. But then all his cows drowned. That was over a year ago. He’s been shut up inside his ranch house, and nobody has seen him since. But recently there have been strange noises and hulking beasts lurking in the shadows.

You begin your adventure in the bog as you approach Bridger’s ranch.

Atmosphere: It is boggy and muddy. Slow burning peat and pockets of natural gas mean that portions of the bog seem to always be on fire.

Atmosphere: a spooky abandoned house that is just starting to revert to nature.

Sarracenia didn’t listen when they warned her about the dangers of dark magic.

After the incident, the witch’s library sank slowly over hundreds of years into the bog. Bridger unknowingly built his ranch house right on top of it. She calls out to him in his sleep, haunting his dreams. And when he discovered the library far below the floorboards in his cellar, he also recovered her skull. It speaks to him. It speaks to anybody who will listen.

He thinks he can use her to bring his cows back to life. She thinks she can use him to find a new body for her to live in.

Atmosphere: The library has been swallowed by the earth. Mud and stone and roots and vines press in all sides, crumbling the walls and pressing up through the floors.

Yrsa didn’t listen when they told her to surrender.

She sailed her longship, The Dragon Bear, inland to escape her pursuers and eventually ran aground, capsized, and sank. Today the wreckage of The Dragon Bear rests far below the library. And its captain, the dread pirate Yrsa, is cursed to be drowned every night by her one true love, the sea.

The people of the valley didn’t listen when god told them she loves them.

Deep in the rocky caves below the shipwreck is an abandoned altar to a forgotten god.

Atmosphere: Ice crystals form on surfaces. Veins of precious stones can be seen in the walls. It is dark. Luminous lichen and fungus provide dim light. 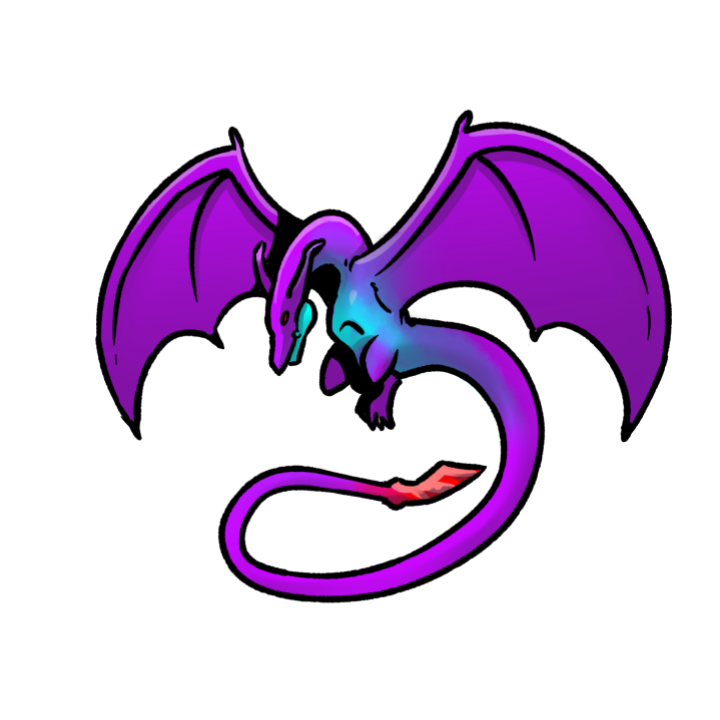 Dragonkin the size if a large house cat. Its scales are a radiant purple pink. It has two small forelegs and a long snakelike body. It has small beady eyes and is slowly getting more and more farsighted much to its consternation. It devours stories. 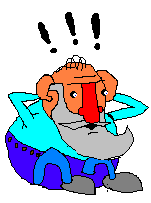 Bridger has made it down into the womb of the earth only to learn that legacy fades for even the most powerful of gods and men. He is quite distraught. Also, he’s kind of scared that the Warden knows about all his experiments on cows and might hate him.

Mien: Angry! | All For Naught! | Resigned | Nihilistic | Woebegotten | Self Pitying

An amoeba shaped plant covered in dew tipped spines. It can’t do much if you don’t touch it. But if you do, you’ll likely get stuck. And then slowly broken down and digested.

A fearsome bog beast. Its front half is that of a crocodile. And its back half is the front part of an alligator. 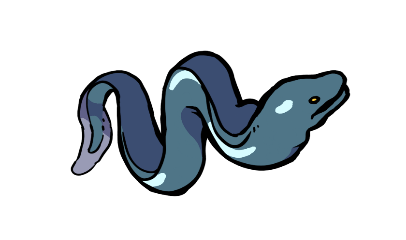 Thick muscular body. This eel has spent a lot of time feeding its mind, but not feeding its belly.

The fabled Hydra Crab! Two more appear for every one you squash. 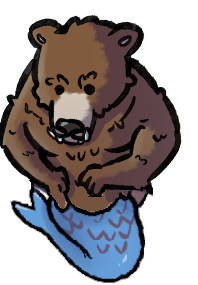 A fucking bear with the tail of a fish. You know how tuna is the chicken of the sea? It’s like that, except it’s the bear of the sea.

Millions of years ago, an iceberg descended from the mountains and carved out this valley on its slow sojourn to the sea. Moraine, a small shard of ice, is all that is left of that berg now. She shaped the face of the earth and of countless lives in this valley. But now nobody remembers her or knows her name.

A ghoulish, monkey-like imp that that feeds on flesh and carrion. Mostly jaws and jowls and four long noodly arms for made for grabbing and shoveling food into its mouth. 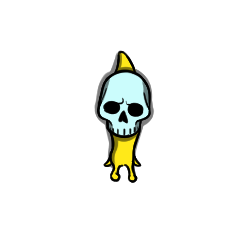 Once the renowned and feared Bog Witch of Cooper’s Kettle, Sarracenia is now an ill-tempered skull with purple amethysts for eyes. She is quite capable of speech and minor illusions and pyrotechnics. More than anything else, she wants a new body. Any body will do. 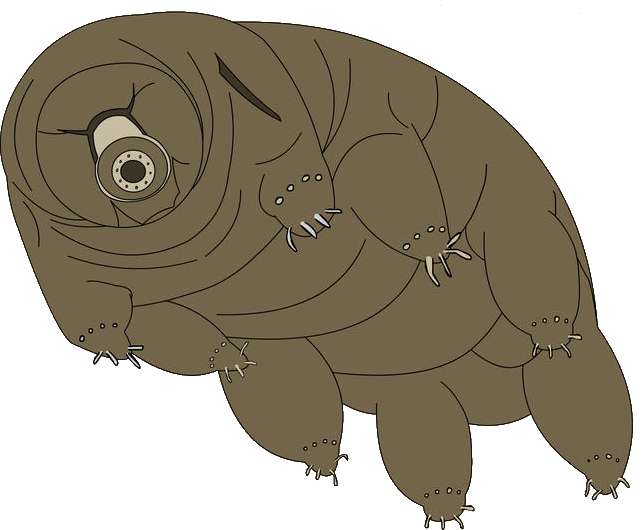 Tardigrades can easily survive some of the most extreme conditions on earth. They have eight jointless legs, each tipped with four sharp claws. They move about like they’re made of jelly. 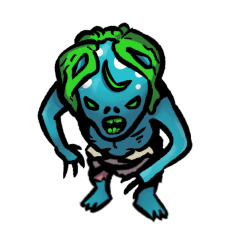 Sarracenia stitched together a lot of different bodies as potential hosts for her spirit. Some of the rejects still wander around the library.

Mien: Just Out For A Stroll | Plagued By Memories | Compliant | Braaaaains | Defensive | Territorial 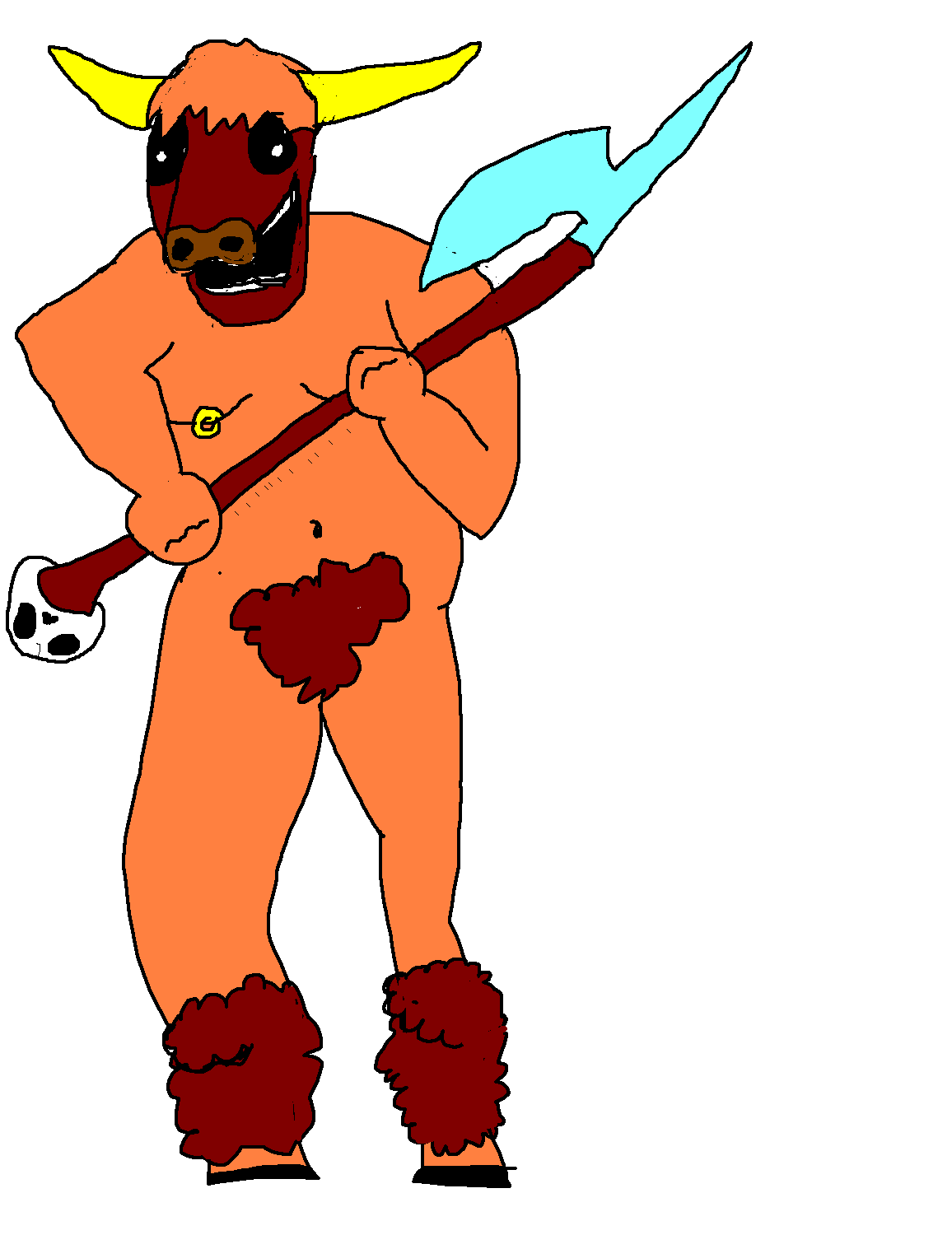 A creature with the head and tail of a bull, the body of a man, and the intelligence of a child. It loves riddles and jokes. 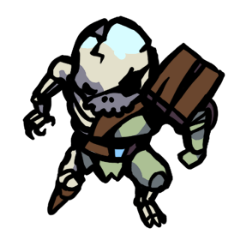 Yrsa was once the scourge of the seas, a fearsome viking pirate, captain of the Dragon Bear. Now she is mournful and defeated. Every day at high tide, she sinks down to the bottom of the sea and is drowned, only to return to her quarters afterwards. She yearns to escape her curse. She knows of a power below the ice sheet that might be able to free her, but is unable to travel there herself. Bridger passed through here some time ago.

Mutant Cows start with a “Mutant Cow (3)” trait. You might add another 1 - 2 dice trait depending on how challenging you want it to be.

Roll 1d3 (or more) and follow underlined words to that table:

Each tome includes an action and a domain:

Use the first and/or second term. Or roll twice and combine.